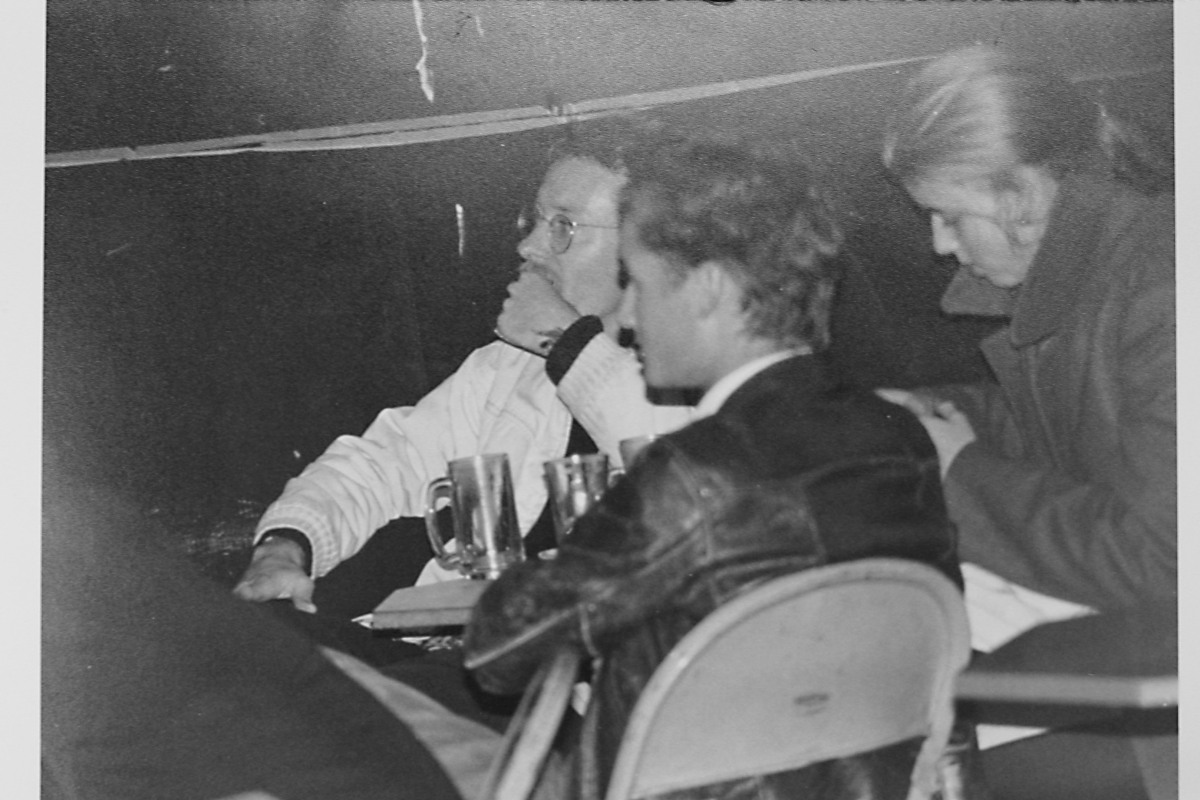 The bus back from Cabrillo College where I took general ed and a poetry class (and an English class with lamps) was a slow ride. It seemed to stop every block. People would attach and detach their bikes from the front rack as if they had the whole afternoon free instead of a bus load of impatient passengers sending them hurry-up glares.

While taking the bus back from Cabrillo and heading to work in Scotts Valley, a tall man with a briefcase got on the bus and sat next to me. Uncommonly handsome with mussed dark hair and blue eyes, he had the look of someone who was used to getting attention. He seemed comfortable with admiration.

He opened the briefcase. I peered in. Inside he had a square bottle of thick mango juice and a stack of blue fliers, hand drawn with a Sharpie pen and photocopied. I wanted to talk to him.

I ran over possible lines in my head. Your mango juice might spill. No, too negative. Don’t see a lot of guys with briefcases on the bus. How was that a good thing to say? I settled on this: “What are the fliers for?”

He handed me one. “I’m in a band. We’re having a show tonight. Want to come?”

“I don’t know.” I hesitated but I was tempted.

I spelled out my name for him. He wrote it down on the back of a blue flyer. He said it was a pretty name. He took care to tuck the flyer with my name on it in one of the inner silky pockets and closed the briefcase. His was the next stop. Uncurling his length toward the bus ceiling, he stood to go. He gave me a gargoyle’s smile as he shook my hand and told me he’d see me later that night.

It had been just a bus ride before the man with the briefcase boarded. Then it became an adventure.

The show was in a café that was seedy and charming, heavy on the seedy. The front door was kept open to the night air. It took a moment to orient myself to the atmosphere when I first got near the café. It was a world unto itself with its own smell, sound, look and culture. I could smell it and hear it before I could see it. French roast wafted out to mingle with the ocean air that carried strains of music, conversation and clinking dishes.

The café faced the metro station and the buses motored by at regular intervals. Next to the café, a whirring machine blew bubbles into the darkness. They rose, shining with tiny orangey reflections from the orangey street lights.

The café cockroaches knew martial arts and took no guff from the patrons. They sauntered over the floor during business hours without fear.

They didn’t matter much. It was so dark inside that it was hard to distinguish the cockroaches from the years of coffee stains and gunk built up in layers on the floor, like levels of civilization that an archaeologist could read in the future: We can tell that in 1988, someone spilled their soy latte here in this area. Then later in the afternoon, a vial of patchouli broke when a girl dropped her Guatemalan woven bag under the table.

I was peeling my Doc Martins from the sticky surface more than walking.

I walked through the front part of the café where the espresso machine hissed. Cool people draped themselves over furniture that had seen its heyday decades before. None of the tables matched and the chairs were metal folding chairs with different patterns of rust spots as if they’d been pulled from a soggy dumpster. Which they probably were.

I walked to the back room where the shows were. A big-bellied guy with a ZZ Top beard sat on a stool, a silver chain swinging from his wallet when he moved. He held a stack of money on top of a clip board.

He looked at the clipboard and thumbed his way toward the room.

My first time on a guest list, I felt like a mini-celebrity. I pulled my shoulders back as I entered the room. Once in, I scanned for a familiar face. I didn’t see anyone I knew so I joined the crowd standing around the stage.

The opening band was long on enthusiasm. Their vigorous playing only made up part of the gap between reality and talent.

I listened with a waiting ear. It wasn’t the music I wanted to hear. I wanted to hear him, the mysterious stranger with the briefcase from the bus. Would he be guttural, crooning or falsetto? Would he see me?

His flyer campaign and personal charisma had paid off. The room was full. Leather jackets dominated the dress code, with thrift store finds coming in a close second.

The walls showed art from a local artist. By local artist, I mean, one of the majority of the population. You couldn’t throw a rock in Santa Cruz without hitting an artist. The art was done in a neon cartoon style but with a gruesome subject matter. It might have been an ironic rebuttal to the ever present fact of mortality. Or it might have been the Technicolor vomit from a sick mind on drugs. Like the crowd and the decor, it was a mixed message and difficult to decipher.

Soon enough the group with the robust lust for performing was off the stage and his group was on.

His presence dominated the room. Screams replaced the polite clapping that the first group received.

I stood enraptured. With my youth, my impressionable nature and my ability to glom on, I was primed to be a groupie. He sang love songs and I took them personally. Did he see me? I pretended he did. I imagined he could see only me. The crowd blurred away. It was only me standing below and him, above on the stage.

The last song of the set was a cover of Lights by Journey. A blue spotlight lit his face and hair. It shone off him in a holy glow. His voice, sonorous and smooth, filled me with longing.

I had found my charmer. I swayed in fascination, a cobra transfixed. He held the mic in both hands, closing his eyes and telling about how he wanted to be back in the city. I started to miss home myself. Home as I had never known. Home as I could never find. I felt a melancholy so massive that it filled my mouth, like icing that is too heavy but still sweet.

I stood in a transcendent moment, pulsing with joy and connection, filth and shabbiness, beauty and harmony, sorrow and homesickness.

He found me after the show. I was standing to the side and he came up, sweaty with his eyes shining.

“Wow, you’re amazing.” I looked up at him and could almost imagine him still haloed with a blue glow. I was star struck.

“We’re having a party at my house. It’s off Mission Street. Want to come?”

Me invited to his place! My stomach twirled as if my gut had a hamster running in a wheel. I managed an answer, “Yeah, that sounds good.”

He snaked his way through the crowd. I peeled my boots all the way outside but I hardly noticed. In my mind, I was flying.

A guest list. A rock show. A party. What more would come out of this bus ride?

4 thoughts on “Broken hand to pray with (excerpt eight)”