It was the best National Puppy Day ever for me, because I have a puppy!

I’ve had the puppy for about a month.

In January after we lost our beloved dog, Mercy, I wanted a puppy so much that I couldn’t think about anything else.

My husband said, “I think a puppy might overwhelm us. Maybe we should wait until summer after D [our son] graduates.”

I scoffed. How could one puppy overwhelm us?

All we have to do is work full-time, commute, get our son though the last months of high school and take care of our other 6 animals.

What would be overwhelming about a puppy, especially a tiny Chihuahua mixed breed puppy?

Here’s what’s fun about puppies! They are small, untrained dogs! So they have all the needs of dogs with some bonus aspects.

Our new little guy is named Mufasa. He’s got an incredible story that I’ve told you about. We are crazy for him.

He seems to be crazy for us. And sometimes, just crazy!

We live in a single-wide trailer, 15 feet wide and 65 feet long. For those of you unfamiliar with today’s modern mobile home lifestyle, it means our home is skinny enough to go down the highway. It is long like a bowling alley.

Mufasa likes to go to the far end, turn around and then run as fast as dogly possible through the length of the house and bounce off the couch so he flies. Then he goes again.

As you can visualize, this is wildly entertaining. So entertaining, that it makes watching a movie difficult.

We’ve given up watching our Netflix and now we watch Mufasa. 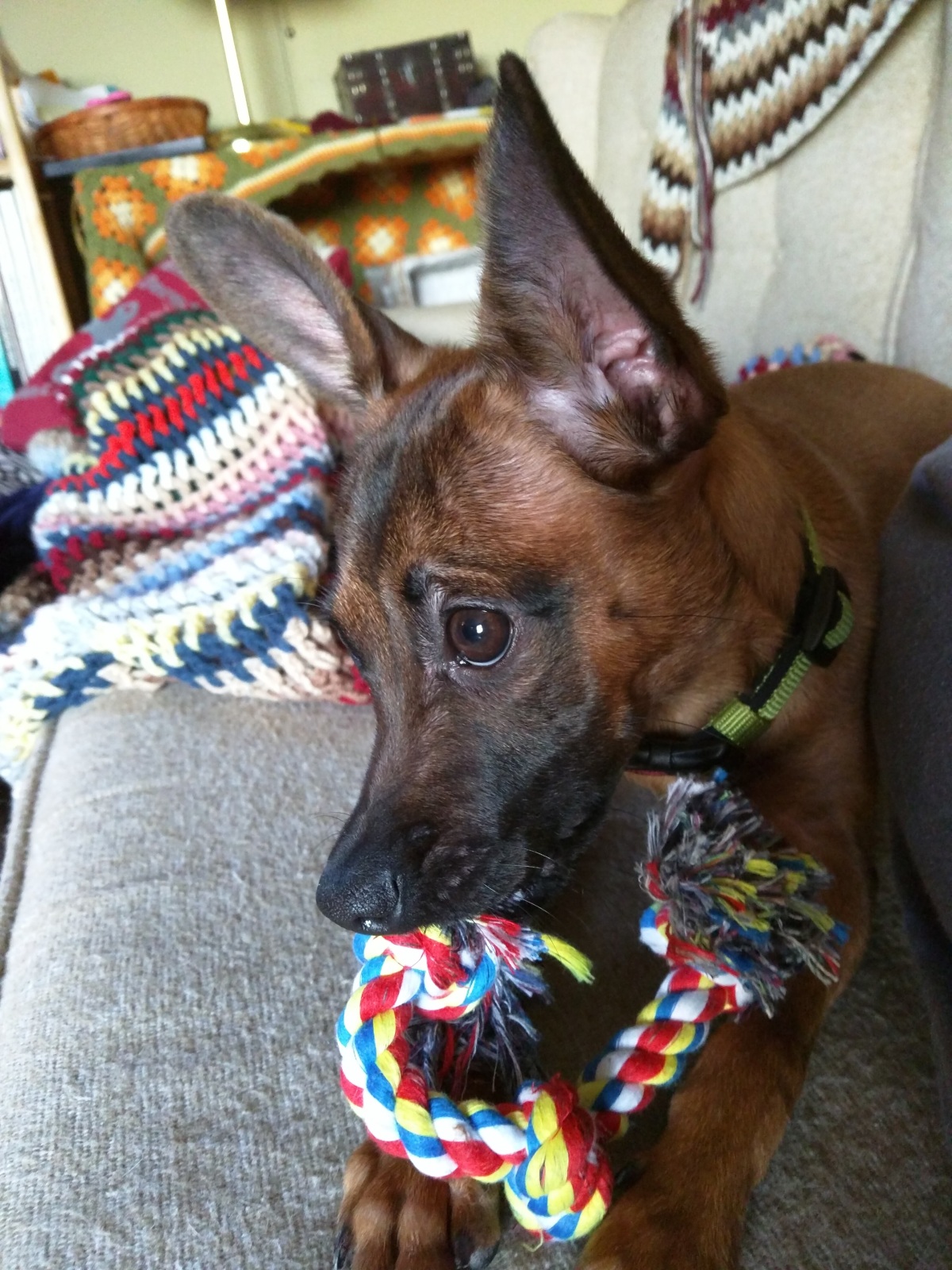 Another amusing fun fact about puppies is that they teeth just like babies. Except somehow I don’t remember going through as many chew toys with my son!

I’m not surprised that Mufasa struggles to understand the difference between what is his for chewing and what is ours. Ours, for not chewing. If you had itchy teeth and you had to choose between a soft leather shoe and a knobby plastic fish that is “scent-infused with salmon,” what would you pick? So I don’t blame him one bit.

He did choose the one pair of shoes that didn’t belong to us. They belonged to my son’s new girlfriend. So we went shoe-shopping this weekend.

We have a huge selection of dog toys. I even have a toy box I put them in. We have a soft rabbit, a crinkly baboon, a rainbow worm, a salmon-scented knobby plastic fish that looks so vaguely obscene from a distance I usually crop it out in photos (if you really want to see it, I included it in the photoshow below), two rubber Kongs, a grey mouse, a red rubber toy, something Himalayan made from yak’s milk and two knotted ropes.

Every evening, I put the toy box down for Mufasa. He puts his whole head in and shakes it around in the toys. He can’t believe his luck. We like to run a small family gambling ring on which he will choose first. I often win with my baboon bet. But knobby fish and Himalayan yak milk stick make a strong showing.

We went to the store yesterday to buy more kibble. We bought five-star food, because it’s Mufasa. My husband said, “Do you realize we spent more on the animals’ food than on our own groceries this week?”

We got home and I fixed dinner for all of us. I snuck some chicken from our people dinner into the dogs’ bowls, because it was National Puppy Day.

But if you’ve learned anything about me, you know I celebrate National Puppy Day every day!

Out for pup cones after dog training class

Relaxing on the recliner